The UN General Assembly and UNESCO declared 2019 as the International Year of the Periodic Table (IYPT) of the Elements to honour the 150th  anniversary of Russian Scientist Dmitry Mendeleyev’s discovery of his famous Periodic Law. WCC regional association RusChlor and its full members participated actively in all the Russian events held. In addition, RusChlor members held scientific workshops and exhibitions at their facilities in honour of this anniversary, which even involved manufacturing and distributing special free souvenirs to participants.

Dmitry Mendeleyev was born on 8 February 1834 in Tobolsk and died on 2 February 1907 in St. Petersburg, Russia. He was the embodiment of a Russian polymath (i.e. a scientist with encyclopedic knowledge) as he successfully produced some fundamental research works in the fields of chemistry, physics, metrology, meteorology, economy, aerostatics, agriculture, chemical technologies, public education in addition to numerous other works linked to the industrial development of Russia. He worked as Professor at St. Petersburg University, as well as Associate Fellow at the St. Petersburg Academy of Sciences. The famous Periodic Law features among his best known discoveries as a fundamental law governing the whole universe. Mendeleyev is also the author of the classic textbook entitled “The Essentials of Chemistry”.

The Periodic Law opened up a new era in the development of all the natural sciences. If the Law had not existed, then it would not have led to today’s interest in chemistry, physics, biology, and the other natural sciences, including the newest chemical products and technologies. The Academy of Sciences of the Russian Federation (RAN), Russian Dmitriy Mendeleev Chemistry Society, Russian and foreign scientists started a discussion on the feasibility of staging all the events considered relevant under the IYPT. The initiative then was upheld at UN level by a few countries worldwide, approximately 80 National Academies of Science and Scientific Societies, and some influential international NGOs including the International Union of Pure and Applied Chemistry (IUPAC) and the International Union of Pure and Applied Physics (IUPAP). The Opening Ceremony was officially staged at the Paris UNESCO headquarters on 29 January 2019.

The Presidium of the Academy of Sciences of the Russian Federation (RAS) then held an Inaugural Session on 6 February 2019 for IYPT on Russian soil. This day was chosen to celebrate both the Russian Science Day and Dmitriy Mendeleev’s birthday. In so doing, the Organising Committee cooperated with the heads of the various Federal Government’s Bodies, Agencies, and Departments as well as the leaders of the most prominent Scientific Research Institutes. 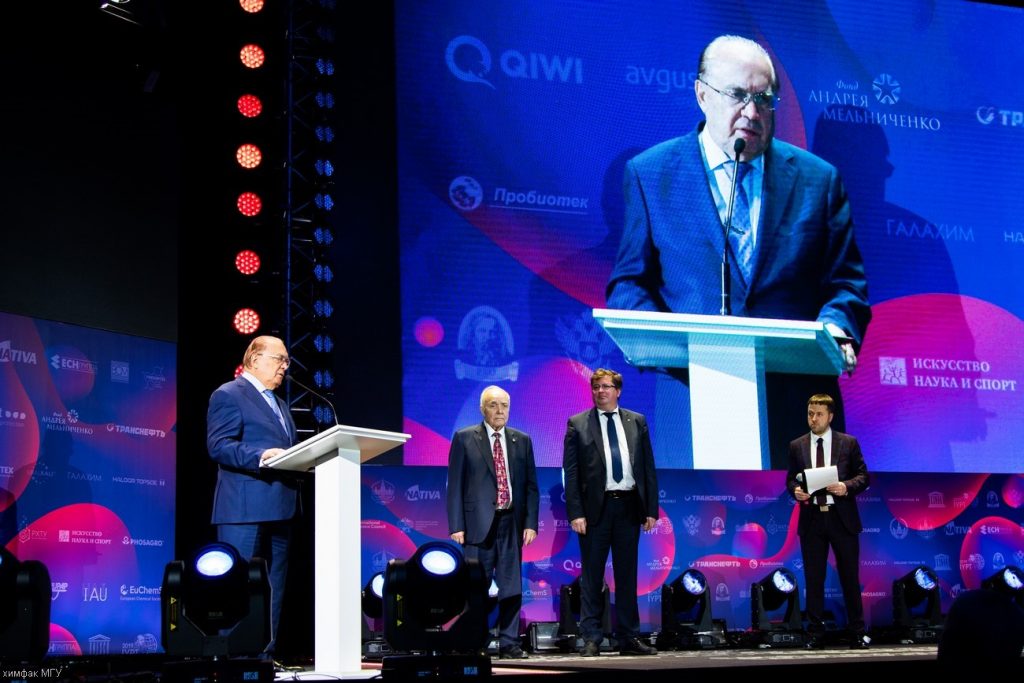 Closing Ceremony for the IYPT held on the premises of the Central Library of Moscow State University.

On 5-7 February 2019, the RAS also held an international exhibition aimed at featuring the history of both the chemical elements and chemistry itself, which has since travelled all over the world under the aegis of UNESCO. Works by Russian, British, French, Chinese, Japanese, and American Scientists were represented at the exhibition. Visitors were shown various artistic installations devoted to the Periodic Table and performed techniques ranging from macramé to the computer games. More than 500 scientific and educational events have been held this year in conjunction with the Mendeleev’s Table of Elements in the Russian Federation since the beginning of this year, including the All-Russia Festival “NAUKA 0+” and the All-Russia Forum of the Teachers of Chemistry. But the pivotal of all these events was the Mendeleyev 21st Convention on the General and Applied Chemistry held in St. Petersburg on 9-13 September 2019 with presentations from more than 2000 representatives of the Scientific Society from both Russia and abroad, including two Nobel Prize winners. IYPT-related events have occurred in almost every country in the world in addition to Russia, including the United States, Germany, Spain, Japan.

IYPT was ceremonially closed twice. Firstly unofficially at the Ceremonial Meeting held on the premises of the Central Library of Moscow State University on 28 November and secondly with the official ceremony held in Tokyo, Japan on 5 December 2019. Although these special activities have taken place this year, the work to widen the contact between scientists from all over the world, heightening the role of science and facilitating the support of scientific research all over the world needs to be continued indefinitely.